Here's a press release from local SoCal bike-sharing startup BikeNation. April, whom I've met, could not be a better choice for such a position, and Bicycle Fixation wishes her the greatest of success! Bike Nation Names Bicycle-Friendly Business District Expert April Economides as General Manager....

Here's a press release from local SoCal bike-sharing startup BikeNation. April, whom I've met, could not be a better choice for such a position, and Bicycle Fixation wishes her the greatest of success! 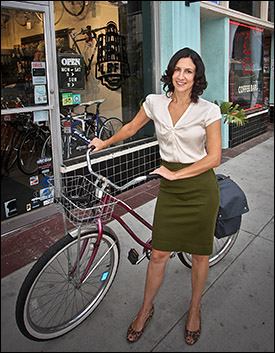 September 10, 2012 (Long Beach, CA)— Bike Nation announced today that bicycle-friendly business district expert April Economides has joined the company as General Manager for its upcoming bike share program in the city of Long Beach, California. Economides created the nation's first Bicycle-Friendly Business District (BFBD) program for the City of Long Beach in partnership with four business districts, as well as the nation's largest citywide discount program for bicyclists called "Bike Saturdays." Bike Nation recently announced plans to roll out a privately-funded program consisting of up to 250 kiosks and 2,500 bikes in Long Beach, with initial installations expected to begin in February of 2013 in downtown.

"We are thrilled April has joined the Bike Nation team and is bringing her expertise in economic development and sustainable management to our bike share program in Long Beach," said Derek Fretheim, Bike Nation's Chief Operating Officer. "Her reputation as a champion of bicycling for everyday people is well deserved and will serve Long Beach's residents and visitors alike very well as we roll out an alternative and ecologically-friendly transportation alternative in the months ahead."

"I'm proud of my hometown for transforming into a healthier, more active city," said Economides. "This bike share program will give resident and tourists a convenient and healthy way to make those short trips that can be easily biked—whether it's to commute to work, run errands, meet friends for dinner or explore the city at human-scale speed. It's a great way to bring new customers into our local businesses and decrease car parking congestion—a top concern for many business districts."

In her new role, Economides will oversee all aspects of operations for Bike Nation's Long Beach bike share program, including stakeholder outreach, kiosk sites and community engagement. She holds an MBA in Sustainable Management and is a car-free bike commuter. Economides, a Long Beach native, is the principal of Green Octopus Consulting, a green business firm that works at the intersection of economic development and sustainable city planning and helps create and promote vibrant, livable communities. She speaks frequently around the U.S. and Canada about "The Business Case for Bicycling" and Bicycle-Friendly Business Districts, launching and inspiring additional BFBD efforts in San Diego, Oakville, Miami, San Jose, Minneapolis and other cities.

Additionally, Economides has advised cities and organizations on placemaking, such as creating parklets and activating urban parks, managed communications and marketing for L.A.'s Figueroa Corridor Business Improvement District for four years and contributed to sustainability plans and metrics for the cities of Long Beach, Claremont and Berkeley. Economides also writes the "Bikes Mean Business" column for Women on Bikes SoCal and served on the host committee for TEDxSoCal, Pro Walk/Pro Bike and the Women's Bicycling Summit.

Along with its bike share pilot program in Long Beach, Bike Nation announced separate bike share agreements earlier this year with the cities of Los Angeles and Anaheim. The Orange County-based company is set to unveil the first of 10 kiosks and 100 bikes in Anaheim later this month, with plans to install up to 40 kiosks and 400 bikes as demand warrants. The company also plans to begin rolling out the first of its 400 kiosks and 4,000 bikes in Downtown Los Angeles, Hollywood, Westwood and Venice Beach early next year.

Bike Nation's bike sharing program is made up of self-service kiosks where individuals can rent and return a bicycle anywhere within a network of stations. Stations are located in close proximity for quick trips where users live, work and visit. The usage fees for the bicycle share system are incentivized for turnover and trips of less than 30 minutes in duration with a single 24-hour membership priced at $6, with discounts for three-day ($12), weekly ($25), monthly ($35), yearly ($75) and yearly student/senior rentals ($50).

About Bike Nation
Bike Nation was established in 2009 when the opportunity arose to develop a new, 'green' form of transportation that combines bike share with sponsorship and advertising. This idea was conceived from a request from Media Nation, and it's Outdoor Bike Banner Division, to participate in the FTA "Mobility Hub" project for Los Angeles, Hollywood and Long Beach. This request was based on Media Nation's long history of nationwide logistical and operational expertise with outdoor media programs such as its bike billboard programs, and long ties to major corporations such as AEG and Verizon. Today, Bike Nation operates in partnership with its sister company Media Nation Enterprises, LLC and is part of a family of companies owned by First Pacific Holdings.