Yeah, it's officially "Silver Lake," but even many of its denizens spell it "Silverlake," which I find to be typographically more felicitious. And it sounds the same, so juxt close your eyes when you say it, if you're an administrative purist. Which is to say....

Yeah, it's officially "Silver Lake," but even many of its denizens spell it "Silverlake," which I find to be typographically more felicitious. And it sounds the same, so juxt close your eyes when you say it, if you're an administrative purist.

Which is to say, I've decided to initiate an irregular series of restaurant reviews, starting with Sunset Boulevard through that neighborhood immediately west of Echo park, and limited to establishments that qualify as

bike-friendly, whether by intent or just circumstance. They won't be full-scale reviews, especially since as a vegetarian I won't sample the full range of wares at most places, and couldn't afford to anyway. But I can give an idea of the range of offerings, how good a meal or two I try there turns out, and whether the atmosphere is exciting, relaxing, homey, elegant, whatever. What the street life is like around each place, and what form the bike-friendliness takes.

It's really just an excuse to eat out more, and a guide to those who need no excuse and are heading out to breakfast, lunch, or dinner on two wheels. 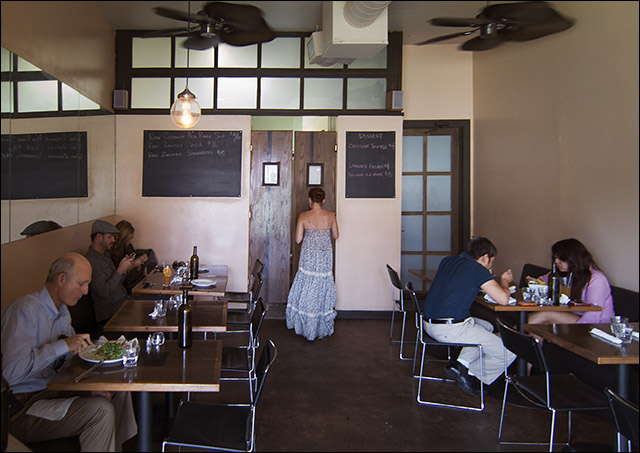 I am a fan of cooking; my wife's a gourmet cook, and I'm pretty good myself within a far more limited range. I love to throw plant bits into boiling oil, and I love baked goods. I've pretty much stayed away from raw-food joints so far, but decided to take the plunge with Cru.

And it was worth it!

Now, I do collards often, and collards can be tough bastards, but these folks have found the tenderest collards possibly in the universe, and the dish was excellent—satisfying and filling. There were some "dehydrated flax chips" in lieu of bread, and they were good too, albeit not crispy. I was impressed enough I'll be back there soon. But vegetarian, vegan, or not, I think you'll like the food. Everything else on the short but thoughtful menu looked appealing—check out the website through the link below.

The ambience is casual-elegant, the waitress friendly, forthright, and competent (and a daily cyclist), the noise level at lunchtime low enough for meetings or romance (she did say it gets quite busy at night). There's a coffeehouse next door if you want something hot with a kick for after dinner.

And it's right on Sunset Triangle, that newly-reclaimed bit of street wehre Griffith Park Boulevard eases into Sunset itself--meaning it's at the intersection of two bikeways as well. Outdoor tables, good neighborhood folks hanging around, and plenty of bike racks to keep your wheels safe. They feed the good folks at Golden Saddle Cyclery now and then.

Try it out. They may even be considering a promotional discount for cyclists. Tell them you rode in when you go there, to give them a bit more incentive.