Back in San Francisco for the first time since last October, when I was riding a Public D1 demo that I reviewed in this rag. This time I'm riding a borrowed Brompton folder, as is Gina; you'll find our review of those a little later--once....

Back in San Francisco for the first time since last October, when I was riding a Public D1 demo that I reviewed in this rag. This time I'm riding a borrowed Brompton folder, as is Gina; you'll find our review of those a little later--once we write it.

Meanwhile, I took a spin around the western portion of the city this morning, and saw a couple of interesting sights worth noting in Bicycle Fixation. Unfortunately for you, I was sans camera--I did want to put some vacation into our working vacation. But I was missing it a little....

I probably wouldn't have been quick enough to snap the very large bakfiets I saw at Church and Market, but it was notable. I think the fellow was a delivery rider, as the box seemed to be insulated.

In the same line, but yesterday, when I met my friend Eric A. at Café de la Presse near Chinatown, he pedaled up on a Big Dummy longtail equipped with not one but two child seats! He had one daughter with him, and was picking up the other at school on the way home. That I've got a photo of, taken during a post-prandial roll along the southern portion of the Embarcadero: 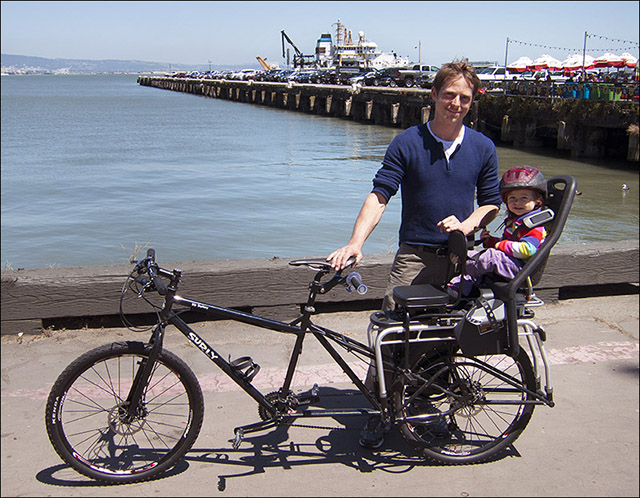 Back to today: as I rode back to our inn from the Richmond district, I decided to follow the Wiggle home--that's SF's famed sneak-through-the-hills bike route, which has been around as a cultural artifact for decades but which now has official signage. Last time I often had trouble locating the tiny bike route signs--which are often obscured by stickers anyway--but today I noticed that much of the route had been graced with sharrows placed in large bright green rectangles to mark the route--with markings placed at an angle within each intersection to show you which way to turn. As there are many, many intersections along the Wiggle, and it turns at most of them (hence the name), this is pretty handy. Good move, SF!

With luck, Gina and I will head to the Golden Gate Bridge and lunch in Sausalito later today. We'll see if things have improved on the far side of the Bay since last year--when they were already pretty good. You can read about our October 2011 visit here.