Rode a 160 yesterday--that is, an Anglo-American century of one hundred miles. Hadn't done that for a couple of years, so figured it was about time--and one of my Long Beach pals had invited me along on a ride honoring retired racer, bike shop owner....

Rode a 160 yesterday--that is, an Anglo-American century of one hundred miles. Hadn't done that for a couple of years, so figured it was about time--and one of my Long Beach pals had invited me along on a ride honoring retired racer, bike shop owner, and cycling advocate Ted Ernst, a local legend if there ever was one, on his eightieth birthday. I hadn't met Ted before, but had heard about him for decades, so I saddled up early yesterday morning and wandered southeastward till I came to the Los Angeles River bike path in the industrial flats around the city of Vernon. Where I took the following pictures of the river waking up with the sleep still in its eyes.... 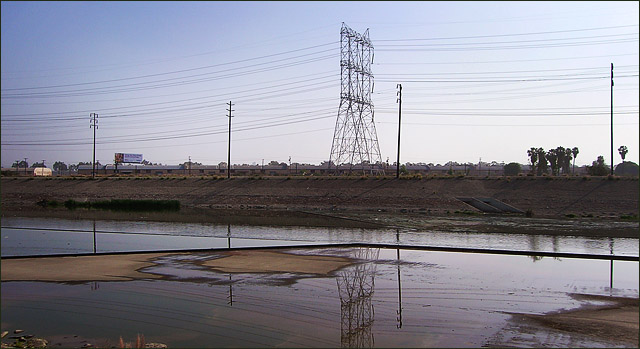 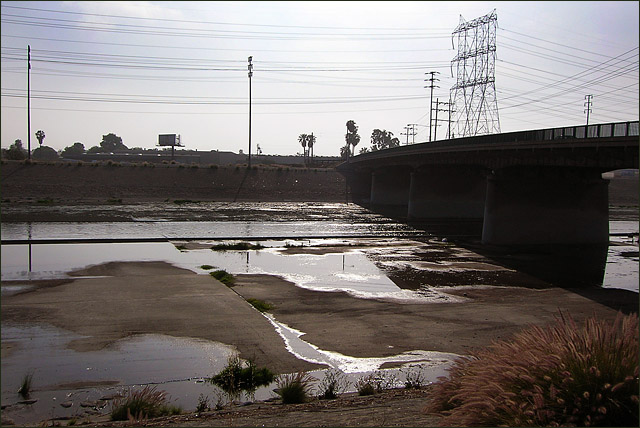 The rest of the ride was pleasant if uneventful, and after a detour around a parade in Long Beach itself I arrived at the ride HQ in plenty of time for juice and pastries, and good fellowship. Grip and grin all around, and off we went, cruising along road bridges over the numerous marinas and inlets of the area, watching happy people relaxing on the sand or on boats or at sidewalk tables, dodging around the beach cruisers and basket bikes, till we got to the happy chaos of the Huntington beach pier.

What a festive, crowded scene it made! Bright colors, music, and easy smiles all around. Unfortunately, ride boss Matty never stays at the pier longer than necessary for a bathroom stop, so I'll have to go back there on my own some day for a lazy lunch and an hour or two of photography, but there was lunch and more fellowship waiting back at HQ, and on we rode.

The day waned as we ate, so, with a century in mind, I left around half past two, anticipating the usual headwind along Anaheim Street, a veritable monument to bleakness cutting across behind the two harbors, bordered by shrieking, smoking refineries, truck yards, and railroad tracks. Those tracks more or less support the US economy, and Anaheim rears up in steep, broad humps to carry its seven lanes over them several times. With the wind in my face and seventy miles already behind me, I felt the climbs! Especially as I was of course riding my fixed-gear.

But a short while after the last of those, I was at Redondo Beach, which I ride to so often that it feels like home turf to me anymore. From there to the Bicycle Bridge at Playa del Rey is an easy cruise along the sand, and from the Bridge a creekside bike path takes me almost all the way home.

Where Gina had a "restorative dinner" waiting for me--home-made spinach and garlic soup, home-baked bread, and fresh strawberries.

And I slept well.