Bicycle Fixation Weblog
Home » Archives » May 2012 » A Monument to Cluelessness

Our city's much-heralded Expo Line light rail spur opened recently, connecting Downtown to USC and South Park, several historically-significant Black neighborhoods such as Leimert Park and Baldwin Hills, and Culver City, with an extension to West Los Angeles and Santa Monica due in a couple....

Our city's much-heralded Expo Line light rail spur opened recently, connecting Downtown to USC and South Park, several historically-significant Black neighborhoods such as Leimert Park and Baldwin Hills, and Culver City, with an extension to West Los Angeles and Santa Monica due in a couple more years. I love the Metro trains; they're quick, comfortable, and convivial, always have room for a bike, and (the subway excepted, of course) give you a usually stunning visual tour of the city while they get you to your destination in good time and good company.

But Metro still doesn't quite get that "multi-modal" doesn't mean building giant parking lots at stations and neglecting all the more efficient modes of travel.

The picture below is a good illustration: 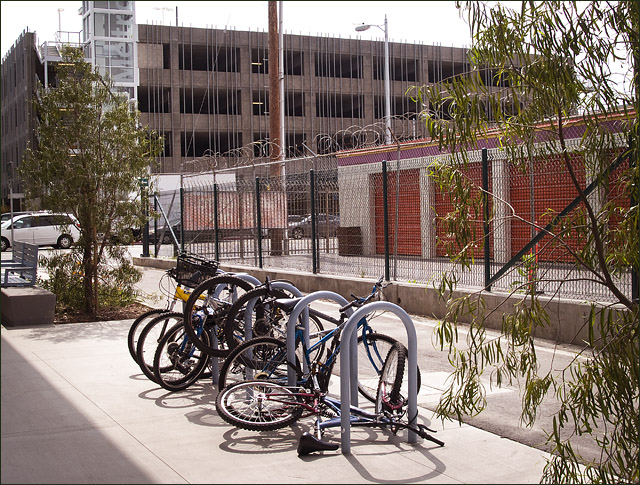 Looming behind it, across the street, is a prime exampole of Stalinist architecture housing 476 parking spaces for cars. Parking spaces that at current rates would have cost between $30,000 and $70,000...each.

That space could have been housing, commerce, a school or library, a community square, what have you...instead, it will just store cars.... What a waste!

Why don't we just buy their gas for them too? Maybe buy them bigger cars while we're at it, so they can clog up our expensive roads all the more effectively.

Sure, someone paid for the bike rack too--I'll bet it cost close to $800 to buy and install. Of course it takes up less space than one of those car slots in the structure, and brings the Expo Line twelve riders instead of one or two.

Couldn't we have taken the idea of enticing people to switch to more effective transport modes more seriously and built a tiny parking structure for cars, an equally tiny (but effectively more capacious) parking structure for bikes, and used the rest of the money that giant blockhouse cost to hire more bus drivers and buy more buses, bringing people to the station from the neighborhood in wholesale lots rather than dribs and dabs?

That's a lot less wear on streets, and a lot less need for expensive lane-miles--lane-miles that double dip, because not only do they cost to build and maintain, but they take land out of use so it generates no property or sales taxes for the city and county.

And bikes, of course--they require only about a tenth the space for travel lanes or parking, per passenger, that cars do. And it would take centuries for heavy bike traffic to wear out a road.

Why do we keep lavishing money on the least efficient mode of transport even at our light rail stations?