It's taken over a year, but Los Angeles has just installed its second bike corral. The first one, in Highland Park , was installed nearly two years after the City Council voted unanimously to approve it. LA's not too swift, is it? This bike corral....

It's taken over a year, but Los Angeles has just installed its second bike corral.

The first one, in Highland Park, was installed nearly two years after the City Council voted unanimously to approve it.

This bike corral is a little different, though, in that it is part of a new pedestrian plaza in Silverlake: 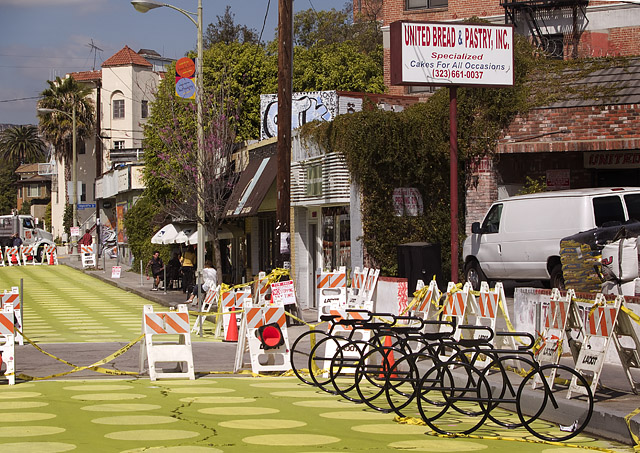 Though the plaza's design was inspired by the one in Manhattan's Times Square, the Living Streets LA website reports that the concept originated in the neighborhood in 2006...so it's been hanging fire for six years!

And even now it is considered a "pilot project," and may be dismantled in a year....

Such is LA, possibly the most timid of world cities.

I suspect it will stay; the area is rich with cycling and walking and the kind of small businesses that thrive on street life. The neighborhood is giving up a few yards of street, where an angled avenue feeding into Sunset Boulevard leaves a little triangle of grass; now the hypotenuse of the triangle has been blocked off to cars and made into a real community space. This will concentrate foot and bike traffic in an area full of bistros, coffeehouses, and small boutiques. Car traffic, whether speeding or congested, kills street life and the businesses it supports, and isn't very good at bringing in customers; you can park twelve to fourteen times as many bikes as cars in a given stretch of asphalt. Give people a place to linger comfortably, and they will come and linger--and after lingering long enough, they will get hungry. Business should boom!

And so should community. The neighborhood will become safer, livelier, happier, and busier as more people visit it and perhaps decide to move in--and move through it slowly, on their own power, meeting each other and building strong hearts not just literally but emotionally.

It opens officially in a few days--on Sunday, March 4th; I think I'll be there.