[Previous entry: "The New Knickers Have Arrived!"] [Next entry: "Another Clever Bike Rack"]

I stopped at the Santa Monica Farmers Market today to have a chat with fellow bike advocate Eric Weinstein there, and on leaving I noticed an amusing diversity of bikes parked next to my old Bottecchia at the bike valet: There's a streetified Cannondale hardtail....

I stopped at the Santa Monica Farmers Market today to have a chat with fellow bike advocate Eric Weinstein there, and on leaving I noticed an amusing diversity of bikes parked next to my old Bottecchia at the bike valet: 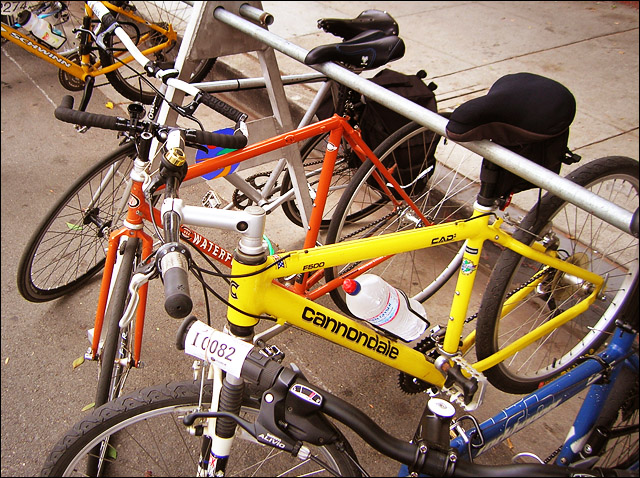 There's a streetified Cannondale hardtail MTB, a Waterford production fixie, and a Swobo fixie, then a Schwinn MTB; not in the frame were dozens more singlespeeds, fixies, cruisers, hybrids, and road bikes, most sporting racks or baskets.

The bike valet is there every Sunday--there are permanent city signs reserving the space--and ti's always heavily used, even on rainy days. (In fact, today was drizzling slightly.) The sidewalk racks were full as well, as were many of the racks on other blocks of Santa Monica's Main Street.

In fact, when I turned up Rose Avenue on a whim (to see where it went), I noticed a profusion of racks (in this case put in by LADOT, since it's outside of Santa Monica)--well-placed in front of restaurants, boutiques, and other small businesses. Over a dozen between Main and Seventh. And plenty of bikes locked to them, matching well-filled tables and sales floors behind the sidewalk.

This despite a road surface barely better than what you'd find in a Third World warehouse district.

And finally, a small victory: Gina had often complained to our local Whole Foods market of their inadequate bicycle parking, consisting of one wheelbender rack taken up mostly by Magnas, Motivs, and the like. Most customers parked awkwardly to the cart corral. (Yes, they willingly gave up several parking spaces to their carts, but nothing worthwhile for bicycling customers.) Finally I just said we should lock to the wire barrier by the outdoor tables, which we have been doing for several months.

Well, now Whole Foods has remodeled the outdoor seating and included some...well, I'm not quite sure what to call them, so let's say bike retention modalities. I wasn't along when Gina snapped this iPhone picture, but I'll make a point of checking them out soon, though I don't care much for Whole Foods.

They look as though they're set a bit close to the wall, but they do say "BIKE RACK" on them, and include a cutout of a bicycle. And they've got to be better than what was (or rather wasn't) there before. 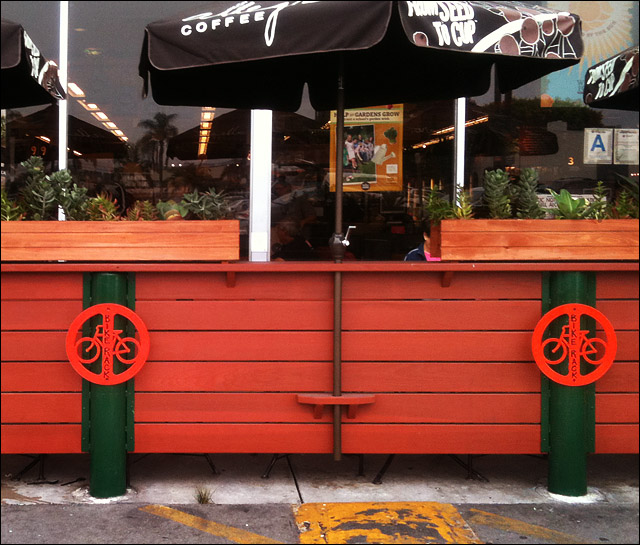 At the Third and Fairfax store in Los Angeles.