Update: Several hours after posting the note below, we heard good news: Kang Hu of LADOT confirmed today in an email sent to LACBC and Bicycle Fixation that the Wilshire Bus Lanes will be open to bicyclists, just as the Downtown rush-hour bus lanes are....

Update:
Several hours after posting the note below, we heard good news: Kang Hu of LADOT confirmed today in an email sent to LACBC and Bicycle Fixation that the Wilshire Bus Lanes
will be open to bicyclists, just as the Downtown rush-hour bus lanes are! He adds, "We will make sure all the signs reflect that regulation." 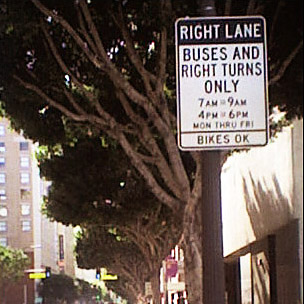 It looks as though Los Angeles is on the verge of implementing its first onstreet bus-only lanes soon. Wilshire Boulevard, the closest thing LA has to a main drag and one of the busiest commute corridor in the country, and it is almost always crowded during the week. Crowded with cars, that is.

And to little avail: LADOT engineer Kang Hu recently released figures showing that the Rapid buses already carry more passengers down Wilshire at rush hour than all the cars in aggregate. That is, 29,000 people on the bus versus 24,000 in cars. Speeding up bus service (and repaving the right lane where the buses would run, as envisioned, to smooth up the ride) would almost certainly entice even more people onto the buses, which already carry a good proportion of white-collar as well as blue collar and service workers. (I ride them quite often and see.) With one bus replacing over 65 cars at rush hour (when the buses are full and the cars almost never are), it would seem to make sense to give more support to the travel mode that works better for all...but of course, this is America. The NIMBYs have been fighting it.

Beverly Hills, which ironically is one of the areas most congested with excessive cars and would have benefited greatly from the lanes, won't have them--showing that "more money than brains" is more than just a facile put-down. So-called "Condo Canyon," a mile of high-end high-rises between Beverly Hills and Westwood, will also be excluded--they were afraid there wouldn't be room for their Lexuses and range Rovers, though how making sure the street is crowded with thousands more cars than could otherwise be the case. Of course, one reason to become rich is so that you can bully others, even if it works against you, so, unless Metro overrules the City Council's recommendations, which is unlikely, the buses--and all the cars--will have to slow down for that stretch of the route as well.

Be that as it may, we will, it seems, get the benefits of 7.7 miles of rush-hour busway on Wilshire, which is better than nothing, or even than the 5.5 miles one council member was insisting upon, since hoity-toity Brentwood was also uncomfortable with the concept. (Seems like rich people certainly love to stand in the way of progress or a better life for all sometimes....)

Why is all this in a magazine dedicated mostly to cycling?

Because the assumption in the bicycle community here has been that these lanes would be shared with cyclists, forming a high-quality rush-hour bike route between Downtown and the Westside. After all, Downtown's own rush-hour bus lanes are shared with bikes, as you see from the sign in the picture, snapped on Spring Street. naturally these will be too....

I recalled that when I first asked whether these lanes would be shared with bikes, the city bureaucracy seemed to think it impractical. (Perhaps they didn't know they were already doing it, or that German cities have done so for years, with a gain in cyclist safety.)

So I did a little research, and what I found did not comfort me...to wit, language stating that "Bicycles and private vehicles turning right can use the lanes."

I have calls in to Metro and the LADOT asking just that. The city's cyclists have devoted a lot of time to promoting these bus lanes partly on the understanding that they would be bike lanes as well, as they are Downtown.

But in Los Angeles, which has not always been steadfast or straightforward in its support of bicycles, it pays to make sure.