My, I get tired of Dutch bike jihadis telling me my bike is impractical and uncomfortable! My little Bottecchia! You know, it doesn't bother me a bit if someone wants to ride a heavy, upright Dutch-style bike. I've extensively road tested and reviewed a couple....

My, I get tired of Dutch bike jihadis telling me my bike is impractical and uncomfortable! 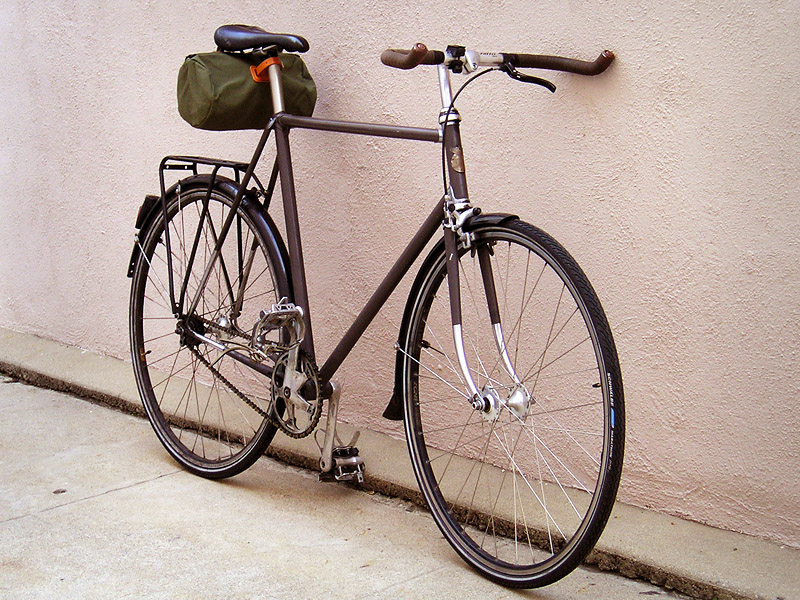 My little Bottecchia!
You know, it doesn't bother me a bit if someone wants to ride a heavy, upright Dutch-style bike. I've extensively road tested and reviewed a couple of them--a (Swedish) Kronan and a (genuine Dutch) Gazelle bakfiets--and given them props for the things they did well.

I've also taken short test rides on a Gazelle Toer Populaire, a very "standard" Dutch city bike, as well as a Batavus and the really quite nice in-between design from Public Bikes.

I liked them all, especially the Public, but none of them could come close to providing the utility I obtain from using my converted 1960s stage-racer, a Bottecchia Professional fitted with fenders, lights, and rack and set up as a fixed gear.

Big cruisers are often replacements for walking, not driving. Fine in a tiny city like Asterdam (or even much of Portland, whose east side is flat and which is only 8 x 8 miles wide anyhow), but not useful in a larger metropolis such as you find in much of North America and parts of the 3rd World, where distances are long and bicycle facilities few. The ones I've ridden were squirrelly at high & low speeds. My path racer city bike, Trevor Wong
Upright bikes are hard on the back, with your spine taking all the load. (And below it your butt, hence the necessity for gigantic wide saddles.) I couldn't ride my 1000km a month on one. I'd certainly have one for neighborhood shopping, but I don't want to be forced into a car for my longer journeys.

Yes, I ride my quick, light bikes in rain, at night, over horrible roads, et al--and I carry loads on them. Sometimes big loads: once packed two rolls of wool gabardine totaling some 70 pounds onto my Bot, and I regularly use it for shopping. Panniers are panniers, and I can put all manner of panniers on my Tubus rack.

I've carried inventory twenty miles over hills in the SoCal heat to Flying Pigeon LA, my Highland Park retailer--that was on Trevor, a path racer (a form of heavy-duty track bike), also, like the Bot, set up with fenders, rack, and lights. We also recently got a trailer for really big loads.

Mind you, I'm no proponent of a full-on racer crouch, either. I've tried that too--I've tried almost everything in nearly fifty years of street riding. Here's what I've found works well: give me primary handgrips about level with the saddle, and enough forward reach to put my back at approximately a 45° angle, and I can ride comfortably fast or slow, near or far, laden or light.

My back never hurts, and I never wear Spandex. In fact, the only concession I make to "cycling gear" is to wear a pair of my own elegant knickers--which I often wear off the bike as well. Hey, they're comfy and they look great! But I ride in long pants too. If you listen to the Danish/Dutch contingent, you'd think this was absolutely impossible.

The gentleman in the photo below would disagree: 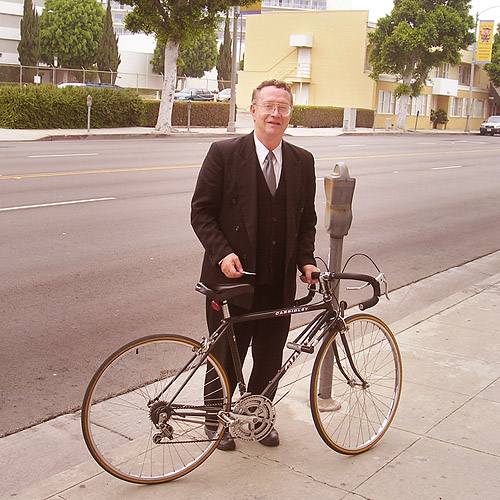 Besides, knickers have a longer history as men's wear than trousers do, so may (if you take a long view) be more "normal."

As to the alleged magisterial ride qualities of heavy bikes (a theme this week), well, that perception stems from a misunderstanding of physics. It's the wide tires always used on big roadsters that give that effect--the cushioning, the stateliness, and the stability--with the latter two the result of the greater pneumatic trail and moment of inertia inherent in wider and heavier tires. If you can fit them on a light bike, you will get the same benefits, regardless of style or seating position. This is what's behind the current practice of converting older road bikes to 650B wheels--which can give you the best of both worlds.

Okay, rant over. Enjoy your ride, whatever it is--and don't diss someone else's just because it doesn't suit your taste.