[Previous entry: "Bicycle Nights"] [Next entry: "A Beautiful Day in the Neighborhood...."]

It's always lurking there, deep under the asphalt, waiting to gnaw its way back into the light and devour the unwary.... "It" is, of course, the massive pothole at the "Hudson River," the intersection of 4 th and Hudson, in Hancock Park in Los Angeles....

It's always lurking there, deep under the asphalt, waiting to gnaw its way back into the light and devour the unwary.... "It" is, of course, the massive pothole at the "Hudson River," the intersection of 4th and Hudson, in Hancock Park in Los Angeles, in the eastbound lane of a heavily-used bike route that we hope to remake as LA's first bicycle boulevard. 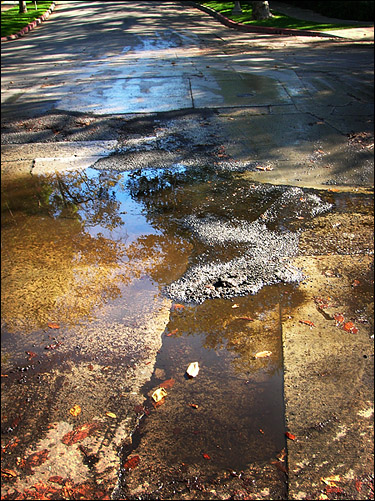 I've written about the bike boulevard plan before, often, and sometimes at great length, and it's a major focus of the Los Angeles County bicycle Coalition.

It must be on the verge of becoming a hot issue, as, like the plain fellow or girl who has suddenly inherited a fortune, it is now drawing the interest of suitors who steadfastly ignored the issue before.

It suffers the embarrassment of drainal leakage--that is, there's a house up the hill a bit that pumps its basement 24/7 into the Hudson, whence it puddles at the intersection undermining the pavement and nurturing slick algae during the warmer months. (The Sanitation Department has told that they cannot stop the homeowner from pumping into the street. The basement floods because of a high water table there, the house having been built over a creek that was "undergrounded" to facilitate development.)

I myself initiated the call for a french drain there, to channel the water across 4th without letting it pool--and the chorus of voices requesting that treatment has grown, in almost perfect proportion to the diminution of the city budget that would have to pay for it.

So while we wait, I (and others) keep dropping a dime on it, calling 311 or using the Bureau of Street Services' service request page, and BSS keeps slapping cold patch on the hole. Which job, because of the water and the speed of the car traffic at that intersection, lasts two to four months.

This time, more people complained louder, I guess, because BSS built a little asphalt berm to channel the water around the asphalt while it cured overnight. The berm was gone this morning, so I assume that BSS considers the job "done."

You take a look at the picture and decide--I shot it from the point of view of an approaching cyclist.

This is the sixth cold patch in two years. I think that in "saving" money by doing the cheapest possible job, BSS has by now spent more than a french drain might have cost.

And we still have an intersection that is an active danger to any cyclist not intimately familiar with it.

Time to step up our nagging. We'll banish that demon yet--working together!