The streets are drying now, but all this morning and into the afternoon a steady drizzle kept the avenues sopping wet, and the skies deep grey. I love this weather, so I suited up in elegant wool and got on my bike. threw a rain....

The streets are drying now, but all this morning and into the afternoon a steady drizzle kept the avenues sopping wet, and the skies deep grey.

I love this weather, so I suited up in elegant wool and got on my bike. threw a rain cape and a wind shell into the pannier in case the drizzle became rain, but as it turned out I didn't need them: the weather was soft enough that my own warmth and the breeze of passage were enough to keep me from becoming too damp. 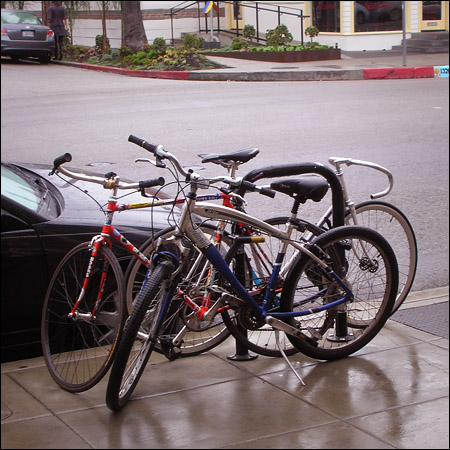 Bikes waiting outside the coffeehouse this morning
In fact, I remained presentable enough to stop in for coffee at Intelligentsia Coffee in Venice, probably my favorite such place after Caffe Luxxe--one of whose baristas I met hanging out in Intelligentsia!

What really charmed and pleased me today was just how many people were out riding their bikes in the rain. And I don't count the roadies or the homeless here--the first won't miss their workout no matter what; the latter have little choice. I speak of the vast population in between, people who have chosen the bicycle out of neither necessity nor obsession, but simply because it is the best choice for urban travel and a rich experience of the streets.

Stylish women and tidy men, twentysomethings and fiftysomethings, stout and slim, most of them remarkably well dressed, and riding everything from MTBs through flatbar roadbikes to vintage fixies.

Riding to restaurants, to coffeehouses, to boutiques, to the farmers market (whose bike valet was indeed being put to use), and, I suppose, to the beach, after all. Bikes parked everywhere along Main Street where it runs through Venice and Santa Monica, and even for quite a ways inland--in fact, till I came into West Los Angeles on my way home.

There's something that Santa Monica is doing right (and perhaps has done right for decades in managing its growth, I suspect). Venice of course is part of Los Angeles, but, like Echo Park, has always been "different," bohemian, the haunt of beatnicks, hippies, and bums, till its recent gentrification began. But Santa Monica has been its own staid little city, and I fear that the prevalence of bikes in Venice may result from a mixture of historical forwardness and spillover from Santa Monica, and not perhaps from much that the City of Los Angeles has done.

Well, as you know if you have been following my Twitter account, LA has been getting better...but it also has a long way to go.

It's therefore comforting to be able to drop down to Santa Monica and see the future closer at hand than in that other coffee-crazed town up north....