Here's a note on the Carfree Day Critical mass in Curitiba, Brazil, from my cousin Fabio Riesemberg. He notes that Curitiba doesn't quite live up to its "eco city" reputation,, but that at least there's a strong and growing bicycle culture there despite the difficulties....

Here's a note on the Carfree Day Critical mass in Curitiba, Brazil, from my cousin Fabio Riesemberg. He notes that Curitiba doesn't quite live up to its "eco city" reputation,, but that at least there's a strong and growing bicycle culture there despite the difficulties. In his own words:

We had The 1001 Bikes March last Wednesday, in Curitiba, Paraná, state capital, South Brazil, where I live. I'm sending you two pictures. One of them it's me, riding my bike with a placard on back: "one car less". The other one is a fellow passing his fixie over a taxi which insisted in breaking through us. At that moment, hundreds of bikers were crossing the street. However we didn't have any violence that night.

Our Critical Mass movement in Curitiba is one of the most active in Brazil. But Curitiba also has the worst car/inhabitant rate in the country: 1:1.7. Nothing changed during our No Car Day (Sep, 22) in terms of number of cars on the streets. Municipality at the moment is more worried about favorite candidate who is running for state government. It seems there's no time to spend with traffic, specially with cyclers. They didn't even do a serious publicising on this matter.

Our known "Ecological Brazilian City" has 1.7 million people, hitting 3 million if you consider nearby cities attached. I believe we will have some kind of traffic collapse within a [short] time. Many of the people engaged on critical mass movement here use bikes for commuting every day, just like me. We are run over, sworn at and disrespected by drivers almost every day on our way to work or home. Certainly that's not new for you who experience it as well. But this is my statement. Maybe you want to publish as a note on your website or blog. 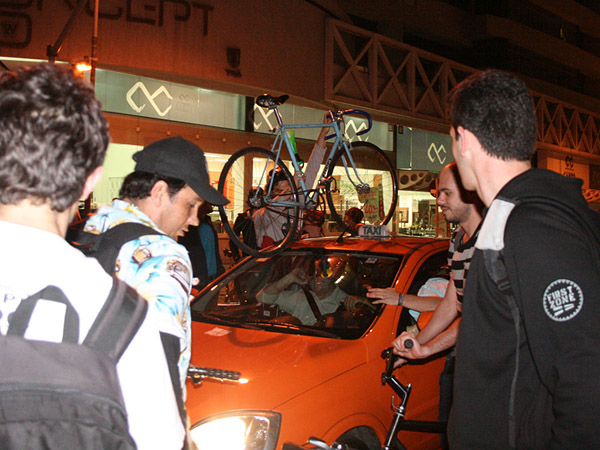 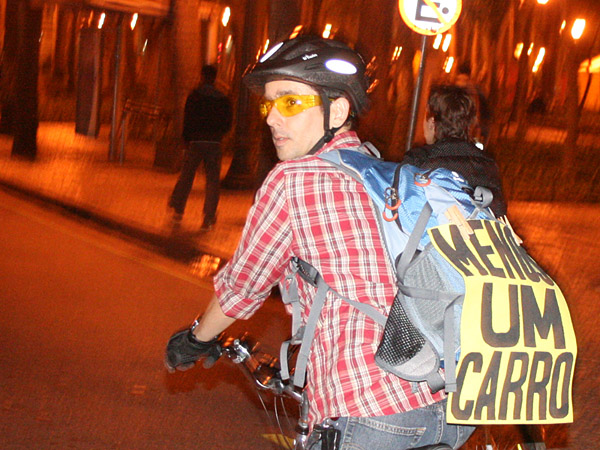 The photos are by Oscar of Bicicleteiros.

Though the numbers are still small worldwide, more and more people each day are realizing that we've been bamboozled by car culture, whose airy delusions promoted in a million print and TV ads have metastasized into a dreary thralldom that saps the joy and strength out of our lives.

Maybe thanks to Curitiba's cyclists that town may someday actually deserve to be called an eco-city.

Keep it up, folks! We're with you!