LA Really Needs a Jolt Right Now! In a move that will have progressives and neighborhood-minded folks giddy with anticipation, well-known bicycle and transit activist Stephen Box announced that he will run for Tom LaBonge's seat on the Los Angeles City Council, in Council District.... 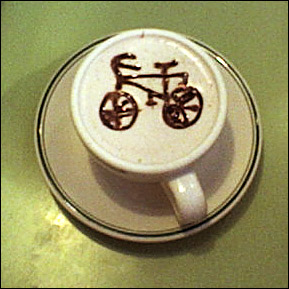 LA Really Needs a Jolt Right Now!
In a move that will have progressives and neighborhood-minded folks giddy with anticipation, well-known bicycle and transit activist Stephen Box announced that he will run for Tom LaBonge's seat on the Los Angeles City Council, in Council District 4. (CD4 includes Griffith Park, much of Hollywood, all of Hancock Park, and all of our own Miracle Mile.)

While incumbent Labonge often talks up bike issues, arranges constituent bike rides in CD4, and seems genuinely to love riding his own blue Miyata, he hasn't really delivered on cycling issues such as lanes, parking, sharrows, and bicycle boulevards, beyond offering lip service--or so it seems to me. Every move LA has taken to broaden transportation choices has been met with either a leaden inertia or straight-out stonewalling, so that while cities big and small even within our own county--Long Beach and Santa Monica, for example--implement sharrows, install bike corrals, and open bicycle boulevards, LA's administration, from the Council down to DOT, keeps saying that such things just "can't be done."

Though it seems that road widenings, speed limit increases on neighborhood avenues, and massive automobile-dependent developments always can be done, and no expenses spared.

Transportation is the dominant feature in Los Angeles's development. From the days when we destroyed one of the finest rapid transit systems the world had known, through the dissection of entire communities by ten-lane freeways and their interchanges, to the struggles of rebuilding what is becoming an effective though not yet comprehensive Metro, and now the growth of our present efforts to nurture the widespread use of bicycles that the city is ripe for, "mobility" has defined the character of LA. And has defied it as well, making of us less a city than a collection of lost souls entrapped in rolling tin purgatories.

Box, if he wins, would be the strongest voice not only for cycling but for sustainable development in general on the Council. But can he win? LaBonge has been in the administration as staffer or council member since 1976 and is well-entrenched; he is also one of the best friends the old-school development community has ever had here in recent years.

Box could bring a new style of development to LA--one that in the long run would result in a more efficient government and more prosperous communities--but will the business-as-usual crowd, who have been living a continuous birthday party in LA at the city's and its neighborhoods' expense, understand that, or will they reflexively oppose his candidacy?.

If you live in LA, and particularly if you live in CD4, check out Box's platform on his new website today: StephenBox.com.

While his platform is still not well defined, he has somewhat of a track record, and this may be our first real chance to own the future.