[Previous entry: "Pull"] [Next entry: "A Bike Corral in an Unexpected Place"]

Last night I rode Critical Mass for the first time in a very long time. For one thing, I believe CM has begun to outlive its mission: regular folks are starting to ride bikes on the street more and more, or at least starting to....

Last night I rode Critical Mass for the first time in a very long time.

For one thing, I believe CM has begun to outlive its mission: regular folks are starting to ride bikes on the street more and more, or at least starting to want to ride while feeling a bit timid about doing so; and despite a lot of problems, drivers seem to me to be beginning to be a little more mature about sharing the road. Statistics bear this out, especially in places that have been very pro-active in supporting bicycle transportation, such as New York City, where accidents rates have gone down while bicycle use has gone way up.

But also I felt that CM was being co-opted by bike brats: giddily aggressive teenagers just bent on making a scene and being noticed, by any means necessary, and of course the rebel-without-a-clue types with their bandanna masks and their furrowed brows. I heard reports from friends who still rode CM that fistfights were breaking out not only between riders and motorists but riders and riders as well; that riders were tagging and shoplifting en route; that bikes were being stolen.

But tonight being the night that the LAPD decided to ride along as participants, with a loud and public promise to be on their best behavior (for the cops have indulged in their own brand of thuggism during numerous masses, not to mention at other times), I decided to go along. Not "to protect and to serve," but to enjoy and observe. Would everyone really behave well? The temptation to provoke, on both sides, might be irresistible.

Well, I am happy to report that both sides resisted, and that the wild youth, the self-conscious rebels, and the cops themselves all behaved like actual human beings for a change, and as far as I could see--and you had to see far indeed to see the whole gigantic crowd!--everyone had fun.

There was even cheering from the sidewalk, and from a lot of cars on the street as well (along with some angry honking, of course, as a thousand or so cyclists oozed slowly through intersections).

There were really too many cops--by some counts sixty on bicycles, fifteen or twenty on motorcycles, and a couple in cars--but no one got badge-heavy.

I think both sides enjoyed a bit of consciousness raising, as we used to say back when.

Whether it will last is quite another question, but I hope so. Both the LAPD brass and at least the older-school bike activist celebrities seem to be honestly in favor of a rapprochement.

I rode along farther than I'd planned, but when the mass passed a couple of blocks from home I peeled off. Here are some snaps from the meetup: 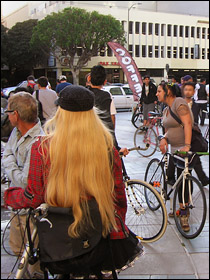 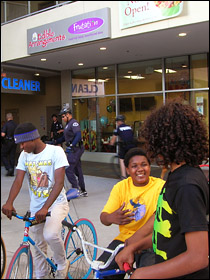 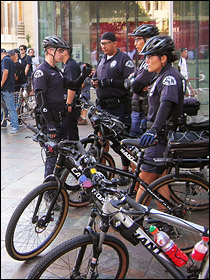 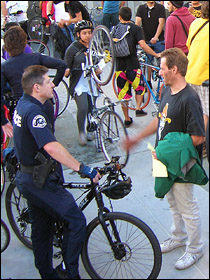 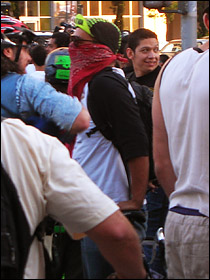 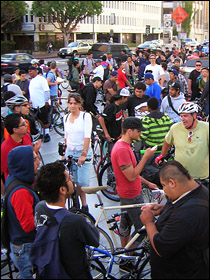 For videos and more pix and paragraphs, see: Streetsblog Los Angeles and BikesideLA. I'm sure more reports will hit the blogosphere soon, so just start searching....