So what do you see in the photo?  •An odd velocipedal mishmash of track bike and retrogrouch commuter  •An updated version of the quintessential British touring fixie  •A healthy example of clean transportation  •A violation of Los Angeles Municipal Code SEC. 88.10, which states: It.... 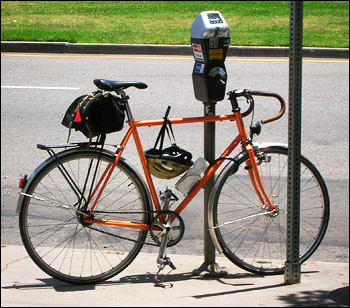 So what do you see in the photo?

•An odd velocipedal mishmash of track bike and retrogrouch commuter
•An updated version of the quintessential British touring fixie
•A healthy example of clean transportation
•A violation of Los Angeles Municipal Code SEC. 88.10, which states: It shall be unlawful for any person to attach anything or to allow a bicycle, newsrack or any other article or thing to lean against a parking meter or a parking meter standard.

Indeed, I committed a criminal act when I locked my bike to the parking meter so I could savor the exquisite espresso at Caffe Luxxe, which is on a stretch of San Vicente lying within the jurisdiction of the City of Los Angeles.

Isn't it time to abolish this stupid provision, which is never enforced anyway? Its only possible use these days might be to give LA's more badge-heavy cops an excuse to harass cyclists, and now that the LAPD's top brass have decided to get all sensitive on us, it may become a useless provision.

Meanwhile, LA claims to be trying oh-so-hard to support and increase the use of bicycles for transportation in the city--but dammit, if you can't safely park your bike when you get where you're going, you're not going to ride it there! And I personally know many enthusiastic cyclists who won't travel by bike to destinations where they can't wheel their rides in with them.

Cars should pay for parking--parking spaces for cars are expensive, and driving already receive gigantic subsidies to help them indulge in their lifestyle choice.(Car and fuel fees and taxes pay for less than half of the cost of just building and maintaining roads and street parking--and that doesn't even count externalized costs such as property and business taxes lost when asphalt replaces homes and commercial properties, air and water pollution mitigation, and so forth.)

In fact, cars are so heavily subsidized that carfree cyclists are made to overpay in general taxes to cover the costs of socialized motoring.

Meanwhile, bikes take up almost no road space, and you can park twelve of them in the space of one car (which typically carries 1.2 riders, on average).

Is it too much to ask that we be allowed a few parking racks? Which would save the city money in the long run, as fewer people drove and roads began lasting longer?

And wouldn't a cheap way to add racks to LA's sidewalk be to retrofit current single-space parking meters to convert them into racks? The pole's already mounted and strong; all it needs is a device such as the "Cyclehoop," which is a sturdy ring that can be retrofitted onto poles and, yes, parking meters to provide instant bike parking.

Oh, yeah, that and a change in the Municipal Code.

Get with it, LA. Support cycling by repealing inane provisions such as 88.10, and get some quick and easy bike parking on our streets!