At long last, we had a small but significant step forward for Los Angeles cyclists: today, the City Council unanimously approved a motion to install LA's first bike corral ! Bike corral in front of Portland's Stumptown Coffee on Third In Portland, where there are....

At long last, we had a small but significant step forward for Los Angeles cyclists: today, the City Council unanimously approved a motion to install LA's first bike corral! 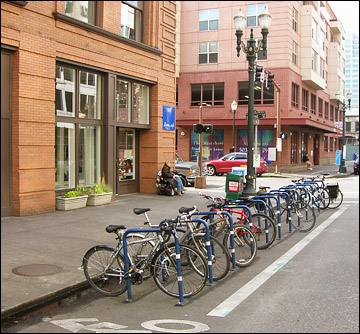 Bike corral in front of Portland's Stumptown Coffee on Third
In Portland, where there are around twenty already in constant use, this news might be a yawner, but here, where we're accustomed to the city bureaucracy putting most bicycle infrastructure enhancements off to some indefinite future, it counts as a victory.

A bike corral simply takes away a car parking space (street, lot, or structure, but usually street) and replaces it with a grid of bike racks. This means that instead of one or two cars, you can park ten to twenty-four bikes in that spot. This is good for cyclists, good for local merchants, good for pedestrians (the bikes are in the street, not on the sidewalks) and even good for motorists, as many of those who now ride to stores would have driven before; cycling, they take up fewer of the remaining car spaces and, of course, reduce traffic on the roadway.

Now we have to see that it actually get built, in a city famous for inertia, but I'm going to let myself be hopeful.

I'd rather see more good bike parking than more bike lanes. You can ride on the street, but when you get where you're going, if you don't have a fairly safe place to lock your bike, you ain't gonna ride it there! Portland's racks and corrals were pretty heavily used all the time; often Gina and I had to park a ways down from restaurants we were going to--because all the numerous bike racks were taken up. A good problem to have!

Hell, in LA you have to lock up to parking meters--and that's technically illegal. There are only 3500 bike racks for the entire city here. (To be fair, LADOT does install racks when businesses ask for them, though it can take a while.)

So, this small item is big news in our giant town. We can't relax, by any means, but we can be glad....

Thanks to LACBC, CICLE, Josef Bray-Ali, and many many more.