Sometimes it seems that the road to 4th Street is longer than 4th Street itself. Of course I mean the road to a bicycle boulevard there--I project with which I have been marginally helping the Los Angeles County Bicycle Coalition. This photo represents a pothole....

Sometimes it seems that the road to 4th Street is longer than 4th Street itself. Of course I mean the road to a bicycle boulevard there--I project with which I have been marginally helping the Los Angeles County Bicycle Coalition. 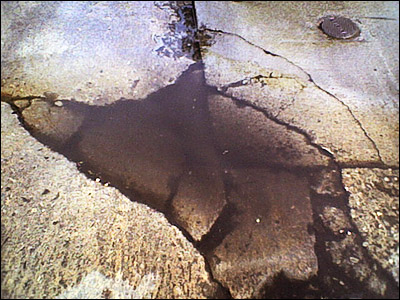 This photo represents a pothole at Hudson and 4th--what local riders call the "Hudson River," because water has been flowing there, and undermining the pavement, continuously for over fifteen years. (As a nearly daily user of 4th for at least that long, I can personally attest to this!)

This hole is jagged, nearly eight inches deep at one point, a good three feet wide, and has been inadequately patched at least three times at my personal instigation, and probably more often than that. Each time, the combination of endless water flow and lurching cars running the stop sign destroys the poorly-done cold patch within three months.

To make it even worse, the constant wetness causes slicker-than-ice algae to grow in the drain channel during the warmer months, and there have been several bike crashes there.

This is on a designated bike route that is one of the most used in LA--as readers of this blog will recall, I often note more cyclists that drivers using it during rush hour.

It is also in one of the most expensive neighborhoods in the city, one where several consuls and other international functionaries live--and receive visitors.

The Bureau of Street Services does try, though Proposition 13 and the something-for-nothing mentality of the rabid anti-taxers has taken its toll on the city's coffers. However, according to the DWP (which I have also contacted regarding the water flow), there is nothing to be done about the underlying problem--which is a high water table from an undergrounded creek that floods the basement of 345 Hudson, whose owners pump the water into the street.

My thought was, why don't they pump it directly into the creek-cum-storm-drain, or, if that is somehow politically infeasible for LA to ask, why doesn't the city install a slot drain across 4th so the water doesn't pool on the surface?

Questions I have actually asked the city, and which have not been answered. The only answer has been the same weary and inadequate cold patch.

I think the best thing is to continue pursuing the Bicycle Boulevard plan with the LACBC. Such a plan would require repaving the entire street, and the extra emphasis on bicycle traffic (which official LA does seem to want to encourage) may spur the powers-that-rather-ineffectually-be to put in a more adequate drain across the intersection, and prevent a few more broken bones.

The city seems to be on a repaving jag in the area, so maybe it will happen!

Read up on the LACBC's project here, and rat out your very own pothole (in LA only) here. They do fix 'em--for a while.