[Previous entry: "Round Round Get Around...."] [Next entry: "The Road to Fourth Street"]

"Blue" for the sky today; I took the photo partway up Cahuenga Pass, which I was climbing on my way from the Miracle Mile to Sherman Oaks, where me pappy lives. The heat has not dried out the landscape yet, though we really haven't had.... 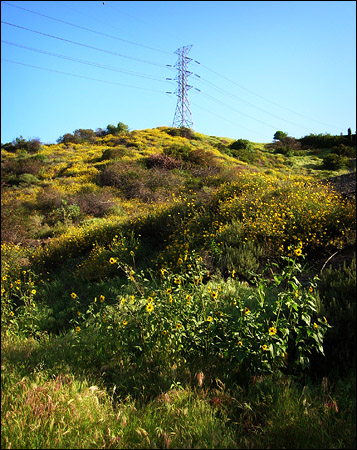 "Blue" for the sky today; I took the photo partway up Cahuenga Pass, which I was climbing on my way from the Miracle Mile to Sherman Oaks, where me pappy lives. The heat has not dried out the landscape yet, though we really haven't had enough rain, and I left early enough to avoid the hottest part of the day on both climbs. Post-visit, I wandered through the ranch-house flats of Valley side streets, avoiding the broad and traffic-jammed arterials, with their glaring asphalt and blaring horns, as much as possible, till I got to Sepulveda Pass, which on its northern slope wanders far from the semi-parallel freeway. Everything green here too, and the sweet-tea scent of jasmine blowing over me in soft waves. It may rain next Thursday; let's hope so, as that may be the last for months, and soon the sere summer days will follow in seemingly endless sequence.

Going down the south slope of the pass is much less pleasing: the road clings tightly to the 405, with its ten lanes of screaming frenzy...but soon enough I turned off Sepulveda and again wound mostly through side streets to Brentwood for coffee and a marzipan-rich almond croissant and Caffe de Luxxe, where I know the weekend baristas, Andreas and Eric, great fellows both.

From there one of my usual routes home.

After a rest and a shower, I ran out again for lemons and goat cheese, necessities for a Secret Dessert Gina's making to follow up son Jack's cooking (he treats tonight!). I got out the orange bike and pedaled to the Third Street Farmers Market for the goods, and on the way out saw a very chic young lady, wearing pressed designer jeans, calf-leather high-heeled half boots, a clingy top, and very expensive looking sunglasses...walking like she owned the universe. And she had one pant leg rolled up: rolled up so perfectly that I suspected her valet had done it for her. Waking from the bike rack with oen pant leg rolled up....

And there in the rack--the new row of racks, in fact, put up because more and more folks are riding to shop--there was the only bike she was likely to have ridden: an immaculate, hot pink, gleaming fixie.

Just the kind too many "serious" riders make fun of.

So I say the hell with those serious riders. Touring bikes, sensible hybrids, chunky commuters, none of those got that lady out of her car and onto a bike.

All hail neon fixies! They're doing the job!

As for the alleged "impracticality" of fixies: I rode my two mountain passes this morning a fixed wheel, and I'm an old fart!

Brought home some vegetables my dad gave me too.