Far in the dim, distant past, before Proposition 13 , California had good roads--in fact, great roads. Roads that rivaled Switzerland's. Roads that didn't deteriorate even as you watched, under the pounding of incessant, compulsive car traffic, in a state where car fees were reduced....

So now, with oil diminishing, the irrational exuberance of the housing bubble deflated to an all-too-rational despair, and gridlock the standard condition of life for weary workers inching back and forth between cookiecutter tract house and dreary McJob, Californians are waking up and trying to do better--better by the earth, and better for themselves. And many of them--of us--are moving into town, living more locally, and riding bicycles.

But since the cities make the wealth that the suburbs still demand, there isn't enough money to keep the streets up after the hammering of the still-intense traffic that our idiotic development patterns very nearly require, so we have this: 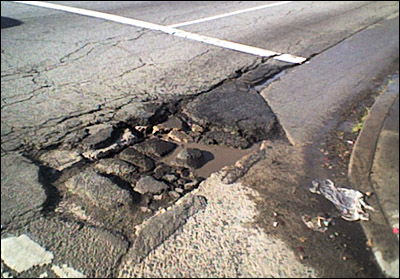 This grim deathtrap is not by any means the worst pothole in Los Angeles; indeed it is rather moderate as those things go. I note it only because it is by a corner that I pass several times a week, to be specific, the northwest corner of Beverly Boulevard and Arden Street, a block from hip 'n' ritzy Larchmont Village and another block from the house where I grew up (well before Larchmont was hip).

It's also a corner where a bike route (Arden) intersects a major arterial (Beverly) often used by cyclists. I've ridden over it myself many dozens of times--gingerly, of course.

Anyway, it is average enough to serve as a symbol of what we have to put up here as cyclists in LA--of what everyone has to put up with, regardless of mode of travel.

Indeed, it even manages to block the crosswalk!

I very much hope your town does better. Meanwhile, I'll go once more to the Bureau of Street Services website and report it--for about the third time.

Usually they fix a pothole within two weeks, but this one requires a bit more work than most. And scheduling a repair on an incessantly busy street isn't easy...especially with no money in the budget.

I'm glad it's starting to change. I wish it were changing faster. But for now, this is what we live with in LA.