It's Tuesday, which means I rode out to South Pasadena to visit with Chuck. It was also the day the second in a series of violent rainstorms rolled in, so I got some good gear testing in on the thirty-eight mile round trip. Not that....

It's Tuesday, which means I rode out to South Pasadena to visit with Chuck. It was also the day the second in a series of violent rainstorms rolled in, so I got some good gear testing in on the thirty-eight mile round trip.

Not that I was really testing gear; I was just riding and wearing what I wear for rainy-day rides, but it's been so long since there was a real rain here that it felt like a shakedown cruise, though all the stuff was tried-and-true. 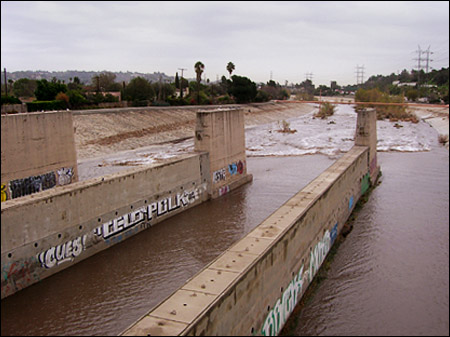 The Los Angeles River, near Silverlake, as I crossed it on the way out
The ride out was uneventful, with the rain starting about five miles from Buster's, where I was of course headed; but that was a light rain, so I didn't bother to break out the Carradice rain cape, as the drops were drying as fast they they landed on me. (Wool knickers and wool jersey helped, of course; nothing beats wool in the damp!)

Once I settled in with a cup of tea in hand and Chuck's mug across the table from me, the rain started crashing down in earnest--streaming, slanting, heavy torrents of water, urged on with an occasional thunderboom. The poor Bottecchia sat patiently under it all, with only the Carradice helmet cover protecting its saddle (a gust having blown away the showercap I usually assign to that duty).

We blew hot air at each other for a while, then I got ready to head for home in a hard but steady rain, when I realized something: when you park the bike at the curb, and you know it will rain, it pays to take the rain gear out of the pannier!

Because otherwise you need to walk from the door of the coffeehouse to where the bike is to put it on...and it's already raining.

Live and learn. I got wetter retrieving the rain cape before leaving than I did (at least from the shins up) on the eighteen mile ride home.

Also, about halfway back, I experienced the closest lightning strike of my life--the universe lighted up, and positively savage concussion of thunder followed by less than a second and startled the hell out of me--though I was in a valley and so quite safe.

By the time I got home the rain had backed off to a gentle patter. A quick wipe-down of the bike after hanging the cape to dry, and I was ready for the rest of the afternoon, at home.