[Previous entry: "Up and Dirty on Mulholland drive"] [Next entry: "Restocking at Last!"]

This is the new bike rack at our local Trader Joe's market, at Third and La Brea. In fact, this is the new, supposedly improved bike rack, replacing an older one of the same configuration that was neither black nor bolted down. You will note.... 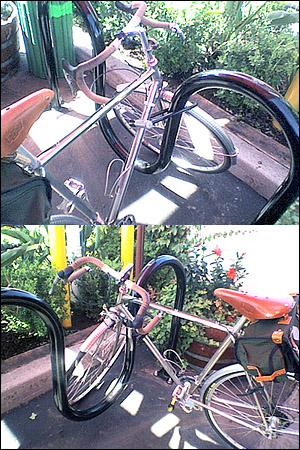 This is the new bike rack at our local Trader Joe's market, at Third and La Brea. In fact, this is the new, supposedly improved bike rack, replacing an older one of the same configuration that was neither black nor bolted down. You will note some of the salient features of this rack.

First and foremost, as you will gather from the awkward position of the front wheel of the bike (Gina's nickel-plated Miyata, Vivian), that the rack is placed too close to the planter curb to be easily usable. The wheel in this position makes the bike more likely to fall, and makes it utterly impossible to use the more secure short-shackle U-locks. It also makes it impossible to put as many bikes into the rack as it was designed to hold.

That's all right, though, as Trader Joe's is evidently not interested in serving their bike-riding customers, since they have also arranged two heavy planters immediately next to the rack, taking up two more bike parking spaces. This changes a four-bike rack into a one-bike rack. (There was, briefly, a second bike parked there, on secured by a long and flimsy cable from top-tube to rack, as it couldn't actually park in the rack.)

So now Trader Joe's can brag about "bike parking" and "being green," when it has actually reduced the available bicycle parking at this store.

The sad thing is that I spoke to the manager about the earlier rack, and he raised my hopes by saying that they were going to add a "better one" in a few weeks. I gave him some verbal advice, and followed that up with a polite note to the Trader Joe's administrative offices, including a link to the bicycle parking guidelines published by the Association of Bicycle and Pedestrian Professionals. The manager acknowledged receiving these guidelines from the main office.

When I went by a few weeks later, I saw this rack in its present placement, but not fully bolted down. I mentioned the problem to the same manager, and he said that they would move the rack in a day or two.

When I was still with my ex, I shopped for a family of three exclusively by bike--an ordinary bike with a rear rack and fold-out grocery panniers attached. I could easily carry seventy dollars' worth of groceries per trip, in less-inflated dollars. So don't tell me cyclists don't spend enough money to make it worthwhile accommodating them. Actually, when the matter's been studied, we find that cyclists by and large spend more than drivers--especially at stores that don't sell much in the way of bulk items, such as Trader Joe's.

But the drivers get a parking lot that covers (wastes) nearly one-quarter of the block the store occupies--and cyclists get insults.

I have also been shopping at this Trader Joe's for upwards of fifteen years. But I don't know how long I will feel like keeping it up. Besides the insult, I don't like the hypocrisy. Anything for cars--a kick in the face for cyclists. And "green" braggadocio in their newsletters.

Addendum (1 October 2009): I rode by the Trader Joe's on Olympic near Barrington yesterday, and they at least had an excellent bike rack set-up. Two four-loop racks, properly placed so that one can actually lock a bicycle to them. Especially as they were full of bikes, whose owners were no doubt inside spending money.

I wish the one in my neighborhood would get a clue!