Feeling a little weary after a week of bad sleep, I took the trains over the pasadena to go on Chuck Schmidt's Rose Bowl Vintage Ride . It was a day of lowering skies, dark, tumbling clouds, and on and off rain, and, true to.... 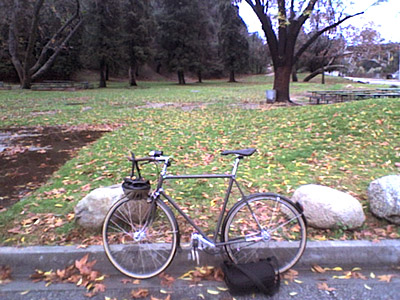 Feeling a little weary after a week of bad sleep, I took the trains over the pasadena to go on Chuck Schmidt's Rose Bowl Vintage Ride. It was a day of lowering skies, dark, tumbling clouds, and on and off rain, and, true to Chuck's prediction, only four people showed up for the ride. We waited an extra fifteen minutes, then took off through a light, pattering rain for a very sweet ride indeed. I was all knickered and sweatered and was comfortable the whole way, and of course the bike had fenders, but even the roadie types were having a happy if somewhat bespattered time.

The route traverses neighborhoods heavy with stately old trees, and there's little traffic; the hot chocolate at Beantown was perfect, and the rain stopped for a while as we set out homeward.

I peeled off in Pasadena and headed back through Highland Park to East Hollywood, about 19 miles under skies that any painter would love. It gladdened me to see that bikes were everywhere today, though the temperature stayed in the upper forties (F) and the rain continued to spatter down irregularly. And I don't mean fanatical club riders who will train come what may, nor the poor who have no other vehicle: I mean plenty of mainstreamers riding clunky old upright hybrids, which were all over the roads and sidewalks and locked up in front of stores and restaurants practically all long my route. These are the folks who will save the world, and I was happy to see them out on their bikes on a cold wet day. 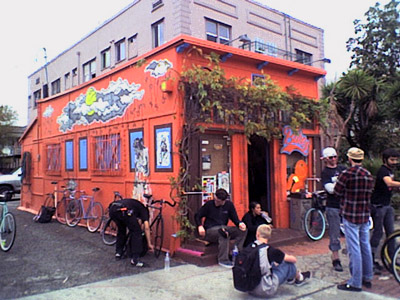 On the way back home I stopped in at Orange 20 to say hello to the gang, and bumped into the LA Fixed ride; a small but doughty horde of twenty- and thirtysomethings riding brakeless fixies from Venice Beach to East Hollywood under brooding skies. Their bikes were the sort that sets the denizens of the various bike forums I afflict spluttering with indignation--yes, one fellow was trying out top tube pads!--but they were out on the road, putting on decent miles. I didn't see any of my fellow listmembers, many of whom I ride with regularly, out in the English sunshine today, but the fixie punx were there (including almost the whole gang from soon-to-be Bicycle Fixation dealer LA Brakeless).

We all had ice cream from the incomparable Scoops across the street from O20, then I headed home.

A good day all around. All the better because it tramples the cliche of the LA fashionista rider.

They ride. I ride. We ride. You ride. Thus we conjugate a better future. The top tube pads don't bother me a bit.